God is Blessing You!

Hello from Manila, Philippines where Robert and I have been speaking at the Global Peace Convention. globalpeacefestival.org/convention/ We are enjoying a very inspirational few days while sharing ourselves and also listening to the other presenters. This morning is Sunday here and we have just been greatly inspired by the peaceful message of Archbishop Eliud Wabukala from Narobi, Kenya as he spoke at an interfaith prayer and meditation service. Yours truly was asked to go up on the platform and help lead in the singing of "Amazing Grace". Somehow the organizers got the message last year that I am the one in the family who sings(not!) I just know all the words to all the songs!! I did sing and it was special.
Right before we left to fly here I posted a photo of our son, Anthony's homecoming. Maybe you were wondering why I had nothing to say?! I actually did but my time was abruptly cut short. Last Tuesday evening Robert and I were home packing and preparing to leave for the airport when I happened to pull-up our flight itinerary. At that moment I realized that our flight left that night at 9:15 pm, NOT 12:15am, three hours later, as we had planned! It was at 7:15pm when I made the discovery, shortly after I had posted Anthony and Robert's photo!! Since we live 65 miles South of LAX airport and since Robert was showering at the time, at that point we did not expect to make our flight. We "flew" out the door just after 7:30. With the help of our daughter, Christina, who drove us, and with the assistance of some very efficient and flexible concierge service personnel at LAX, we managed to get there and check-in 45 minutes before departure, and we even checked our luggage!! And guess what? Our luggage made it too! Well, almost all of our luggage! Once we got to LAX Robert realized that he had left his suit bag with all of his business attire hanging on the back of our bedroom door. In our haste he had remembered his duffel which was filled with exercise clothes, tennis shoes, toiletries, and a case of his newly released books. Not exactly the proper attire for an opening speaker at the Global Peace Conference. (By the way we both travel really casual, especially for a 15 hour flight so those clothes on his back didn't help any!)
This entire episode brings to mind a great scripture found in Proverbs 19:21 "Many are the plans in a man's (or woman's) heart but it is the Lord's purpose that prevails." As much as we try and make things turn out according to our plan (like arriving to the airport at least two hours before an international flight departure!) sometimes things happen and we have to do our best to make it work out anyway. We also have to try to stay calm and remember that God knows what is best and if we "work like it all depends on us and pray like it all depends on God" then we will have a better chance of fulfilling our purpose for the minute, the day, the week, the year, and a for our lifetime.
As it turned out we arrived in the Philippines at 5:30 am which gave us plenty of time to shop for Robert. And in a country where Robert is considered gigantic at 6'3" and 200 pounds, it only took us a short while to find the perfect slacks, shirts and even a navy blue blazer! Once again God proved himself faithful and he provided exactly what we needed when we needed it.
A word on "Welcome Home" from last time. If Robert and myself are this excited about our son's homecoming how much more isn't our heavenly father elated when his children return to him? If there is anything keeping you from a beautiful and fulfilling relationship with our Lord I pray that the obstacles would be lifted and that you would also be able to experience His love and His "peace which passes all understanding." God is waiting to welcome you home.
God is blessing you during this holy season of Christmas. Donna
Posted by Schuller at 5:33 PM 30 comments: 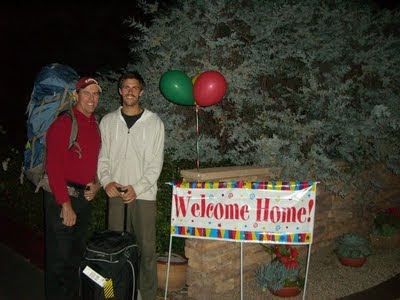