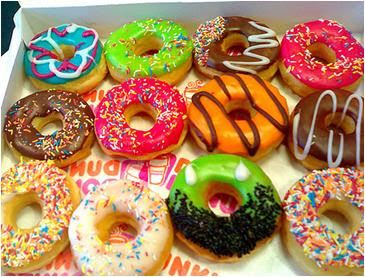 Okay...now I KNOW that there will be a lot of you who will not like this article which was sent to me so I'm writing this first before you scroll down to read it!
Several years ago when my nutritional coaching extended to the church I discovered that as long as I didn't 'touch' people's Sunday donuts they would listen to what I had to say!
Interesting that eating disorders are rampant in the church because over-eating as opposed to excessive drinking, drug abuse, gambling, sex addiction and pornography,  is somehow acceptable addictions although a person with a "food problem" may be suffering just as bad as the rest.   This is frequently a terrible situation because addiction is addiction and it needs to be addressed.   If a person is dealing with an addiction there is an underlying issue causing that addiction which needs to be treated so the person can get well in order to fulfill God's purpose for their life.   What better place should there be than the church to safely deal with and heal from that addiction?  Unfortunately in most cases the whole eating junk food thing has become part of church culture and for many food can be a real problem.   In 2 Corinthians 6 verse 3 we read, "We put no stumbling block in anyone's path, so that our ministry will not be discredited."
Many years ago when my husband and I were pastoring our church at Rancho Capistrano we decided to make a policy which banned donuts from the church campus.  We suggested that people bring muffins or any other healthier alternative as snacks.   I thought we were fair as most muffins aren't exactly health food either but they are a heck of a lot better than the donuts (AKA "Do-Nots'!) We also discouraged handing out candy to the children as rewards because most problems with food begin when we are young and associating candy with reward can cause problems down the road.  You get the picture, I'm sure.     Should we never have sweets or "junk food", of course not, just something to be aware of.
We were created in God's image: body, mind, and soul.   Here's what the Bible says about your body.   "Do you not know that your body is the temple of the Holy Spirit who is in you, whom you have received from God?  You are not your own;  you were bought at a price.  Therefore honor God with your body."  1 Corinthians 6:19, 20
If you close your eyes and and recite this what comes to mind when you think of a temple?   Meditate on that for a few minutes.
A temple is a sacred place and that is how God views your body...His creation.  He dwells in you.  So honor God by honoring your bodies.
Jesus said, "The kingdom of God does not come with your careful observation, nor will people say, 'here it is', or 'there it is', because the kingdom of God is within you."  Luke 17:21
Remember always,  God is blessing you!   Donna

March 25, 2011 (Atlanta, Georgia) Results from a new study suggest that churchgoing folks are consuming a little bit more than the spiritual weight of God's good word [1]. Individuals who attend church frequently in young adulthood are significantly more likely to become obese in middle age, according to a new analysis of the Coronary Artery Risk Development in Young Adults (CARDIA) study.
Presenting the results here this week at EPI|NPAM 2011, the Cardiovascular Disease Epidemiology and Prevention and Nutrition, Physical Activity, and Metabolism 2011 Conference, researchers say the news isn't all doom and gloom, however.
"The upshot is that we know that religious people are less likely to smoke, more likely to have better physical and mental status, and more likely to live longer," lead investigator Dr Matthew
Feinstein (Northwestern University, Chicago, IL) told heartwire . "They're doing a lot right in some areas, but there is room for improvement. There is also a lot of potential for effective initiatives to be implemented because religious organizations often have preexisting infrastructure and social support systems, which are key contributors to establishing effective health initiatives, like antiobesity initiatives."
Last year, along with senior investigator Dr Donald Lloyd-Jones (Northwestern University Feinberg School of Medicine, Chicago, IL), Feinstein and colleagues conducted a cross-sectional analysis of the Multi-Ethnic Study of Atherosclerosis (MESA) cohort and showed that increased religious involvement, including more frequent prayer and meditation, was associated with a greater prevalence of obesity.
"Given that finding, we wanted to look earlier in adulthood in order to understand more about the longitudinal or temporal nature of this relationship," said Feinstein.
The group analyzed religious involvement in 2433 male and female participants aged 20 to 32 years old in the CARDIA trial. Participation in religious services was defined as high (at least once weekly), medium (regular, but not weekly), low (rarely), or never. After approximately 18 years of follow-up, the investigators assessed the cardiovascular risk profile, including obesity, in the now␣middle-aged participants, with middle age defined as between 38 and 50 years of age.
After adjustment for multiple variables, including age, race, sex, education, income, and baseline body-mass index, individuals with a high frequency of religious participation in young adulthood were 50% more likely than those with no religious participation to become obese by middle age.
Odds Ratios for Incidence of Obesity (Adjusted for Baseline Demographics, CVD Risk Factors, and Smoking)
Measure for Obesity
No  religious  participation-    1.0
Low  frequency participation-    0.98
Medium  frequency participation-    1.28
High  frequency participation-    1.48
One previous hypothesis for the increased rates of obesity among churchgoing individuals had been their lower rates of smoking. As smoking acts as an appetite suppressant and churchgoers smoke less frequently, this might have led to higher rates of obesity because they ate more. However, Feinstein and colleagues performed additional analyses that adjusted for smoking and still observed an association between religious participation and obesity, almost to the same degree. In addition, based on the MESA cross-sectional data, some had proposed that obese people were more likely to gravitate toward friends and support in religious communities. However, these new longitudinal data from CARDIA implies that this too is not the case.
"It's tough to infer any causality from this, because we didn't look at specific mechanisms," said Feinstein. "One possible explanation, though, is that religious gatherings might center on eating traditional, high-calorie comfort food, and this in itself might contribute to the higher incidence and prevalence of obesity."

‘Walking in Your Own Shoes: Discover God’s Direction for Your Life’

‘Walking in Your Own Shoes: Discover God’s Direction for Your Life’
Posted by Schuller at 6:19 PM 12 comments: