Hi Friends,
I have not been as active blogging as usual because I am busy designing my website.  It will of course include my blog.  It is a lot of work because I am not a techy!  Stay tuned....Oh. We ARE going to the Holy Land in October 2012!  I will have the exact dates soon. 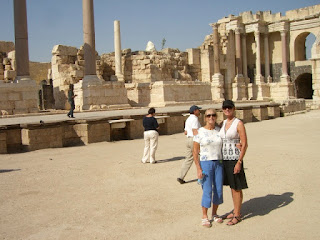 God is blessing you.  Donna
Posted by Schuller at 10:04 PM 5 comments:

A few of you knew that we were putting together another trip to The Holy Land this coming October.  We have decided to postpone the trip, "Walking In The Footsteps Of Jesus" to the end of November or the beginning of December 2012.  If you have never been before you should seriously consider joining us.  Or if you are like me, it gets more exciting with each trip I take!  It is truly the trip of a lifetime.
Please let me know right away if you are interested in going, either by commenting here or by emailing me at rdsm2008@gmail.com

Posted by Schuller at 6:47 PM No comments:

Another Easter has been celebrated and is now history.   After Jesus' death and resurrection the message of hope could not be extinguished or even contained and it flourished around the world! A reminder that as the physical remnant of Jesus the disciples went out into every part of the world and spread the good news!

"But now, for a brief moment, the Lord our God is leaving us a remnant and giving us a firm place in his sanctuary, and so God gives light to our eyes.....he has granted us new life to rebuild the house of our God and repair its ruins...and he has given us a wall of protection"    Ezra 9:8, 9b

Going back centuries we know that the Persian kings were disposed to the Jewish remnant until Cyrus gave them permission to return to Jerusalem.   Xerxes (486-465BC) granted them the privileges, rights and protection that they had prayed for and believed in.  They once again flourished as a great people.  Isaiah had prophesied that the Lord would restore Jerusalem's ruins and that they would "burst into singing." (Isaiah 52:9)

That bursting into singing reminds me of my very first visit back to the Crystal Cathedral since 2008.   It was on Sunday, March 25th.  As the service began and the organ and choir broke into "Joyful, Joyful" voices all around me joined in singing a new song!  Yes, by most appearances it was the same one that had been an opening tradition for years at the service once known for it's excellent music including a world famous choir, organ, and orchestra.  But something had forever changed that day.   What seemed to be lost was once again found.
I was present and very much a part of a remnant of what once was that day.   I wish I could say I was one of those singing but truth be told I was too filled with emotion so when I tried to sing, not a word would come out of my mouth.  It was a beautiful experience and I am convinced that God is weaving bits and pieces of what was into a new and beautiful garment of love and hope.

When you think something is over, it might not be.  When you think it is dead, it might just be sleeping.  When you're sure "it is finished", things might be starting anew.   God can take the scraps and the leftovers, the hurt, the pain, and make something new and beautiful.    I believe he is giving new vitality and joy to the Crystal Cathedral congregation and he is restoring the church for His glory.

Situations can be confusing, painful,  and disheartening but because of the great historical event of the resurrection we can have hope in any challenge we face today.  Remember that great song from Chitty-Chitty-Bang-Bang.?  Look it up.  "From the ashes come the roses of success."

When You are Down,  Look Up!
God is blessing you,  Donna