"I suppose that since most of our hurts come through relationships so will our healing, and I know that grace rarely makes sense for those looking in from the outside.”
― W. Paul Young, The Shack 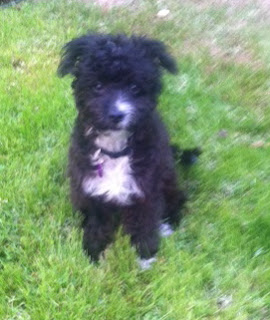 I have a new relationship with a darling little black and white boy!   Just over a month ago I wrote, "When Is It Ever Easy To Say Good-bye?" where I spoke of grief and loss.   Today I'm sharing a photo of someone I have found.  This is my new puppy who I met through "Pet Match Rescue"http://petmatchrescue.org/ in Orange County, CA.   This little guy was saved from what is known as a high-kill shelter in Los Angeles County.  In other words, he would have been euthanized had a nice woman named Linda not found him and sent him to be fostered.  Robert and I met him at a Petco adoption event and fell in love with him, we were "approved" and a few days later he arrived at our home!
There is nothing that brings out happy feelings more than a new pup does... and Jet is great!  Although he is still a little timid, especially with men, at four and a half months he is completely housebroken and he didn't even cry his first night here!!  Not a peep!  He has the sweetest disposition and he's great in the car too!  (I feel like I am composing one of those online descriptions that you can read when you are trying to get a dog but it's all true!)  He is part poodle and part?  He doesn't shed and as you can see he's a bit curly.

God is blessing you.   Donna